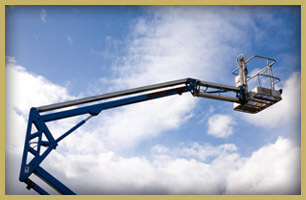 An insulated aerial device, often called a cherry picker, bucket truck or aerial lift, is a tool that is mounted onto the top of a truck utility body. An aerial device has a rotational turret (turntable) that is bolted into a truck utility body. It has a lower and upper boom that allows a worker in a bucket to be lifted to a specific destination. The fiberglass bucket is attached to the upper boom with operational controls mounted on the outside of the bucket. An insulated aerial device is sold intending that it be used in the electrical utility industry to perform work on live high-voltage electrical lines. Insulated aerial devices are also used by power line maintenance companies to remove tree branches that interfere with the power lines.

In the early 1970s, these serious injuries and deaths began to occur throughout the United States. Consequently, one manufacturer appropriately decided to conduct a retrofit program. The retrofit program, known as the barrier kit, consisted of a non-conductive plastic control handle (instead of a conductive steel control handle) and a fiberglass boom tip guard or cover. The manufacturer decided to institute a buy-back program to remove older insulated aerial devices from the market and also included warning placards. By the early 1980s, approximately two-thirds of one manufacturer's insulated aerial devices in the field had been retrofitted with the barrier kits. As a result, boom tip contact injuries began to decline. Eventually, this manufacturer exited the market.

Other subsequent aerial lift device manufacturers continued to sell similar aerial devices for decades that lacked insulated control handles and boom tip covers to insulate, isolate or eliminate conductive metal at the boom tip. Without question, the hazard of boom tip conductivity resulting in the potential for the control handle becoming energized is well understood within industry.

On August 21, 2000, Altec, the largest manufacturer of aerial devices/derrick diggers, issued an Electrical Continuity Hazards Safety Bulletin. In this Safety Bulletin, owners of insulated aerial devices were advised that if any part of the boom tip contacts a conductor, the entire boom tip, including the control handle, must be considered energized. This is the first time that the control handle is identified specifically as a component that is not isolated and must be considered conductive. Six months later, the same manufacturer issued a new warning decal stating, "all metal and fiberglass components at the boom tip, including the controls, may become energized."

Today, economically and technologically available insulated control handles and boom tip covers exist to protect workers from the electrical continuity hazard. Yet, thousands of insulated aerial devices are in the field totally lacking such simple and protective technology.

Another defect involving aerial lift manufacturers is what is known in the industry as "undecking." Undecking occurs when the bolts fastening the turret or turntable fatigue and fracture resulting in the catastrophic collapse of the entire boom. As a result of an undecking, the innocent worker in the bucket can be thrown out sustaining serious spinal injuries or death.

Our firm has extensive experience in evaluating and prosecuting these cases on behalf of seriously injured linemen or bucket truck operators throughout the United States. We have also performed electrical and dialectic testing on components of insulated aerial devices. Our work has primarily involved aerial lifts manufactured by Altec Industries, the largest manufacturer of aerial devices and digger derricks. Randles v. Altec Industries, Inc. Our firm is dedicated to representing linemen and other bucket truck workers who have been seriously injured or killed as a result of manufacturing defects and poor engineering design. Contact us to find out more about our experience in handling these cases.

Past results afford no guarantee of future results. Every case is different and must be judged on its own merits. Missouri Supreme Court Rule 4-7.1.